So the journey to the East begins and four intrepid travellers set off from the East Midlands for the adventure of a lifetime.  So lets introduce the group:

Master Instructor and full time instructor in Taiji, Bagua, Xingyi, Shaolin and Qigong.  Ken (also known as Junior) is the most experienced of our travellers having lived in the Far East as a child and then also visted Nigel in Malaysia a number of times. Ken is also an experience film maker and will be making a series of films about the event.

Is a student of Ken (Junior) and this is his first trip to the Far East.  Billy is 18 years old and has been training with Ken since he was 14 years old and became a British pushing hands champion in April.   He has made trips to France and around the UK for training but this is the furthest he is travelling.

Is a Senior Instructor in the East Midlands region, He teaches Taiji, Kickboxing and has trained in a number of different martial arts thorughout his life including jujitsu and wing chun.  Like Billy, this is the first time he has made a journey to the Far East and this is also his first plane journey.

I am also a student of Ken (Junior) and I travelled with him to the 20th Anniversary in Malaysia in 2008. I am looking forward to another adventure of a lifetime.

This year is the 25th Anniversary of the Zhong Ding Association.  As part of the celebrations, a Training Extravaganza will take place in Penang, Malaysia during the month of August.

Zhong Ding students from around the world will be travelling to Penang to take part in the event an in particular, students from the East Midlands will be attending.  This blog charts the journey of these students as they travel from the UK and take part in the event.  Some of these students have never left the UK before so this will be an epic journey.
Posted by Unknown at 06:51 No comments: 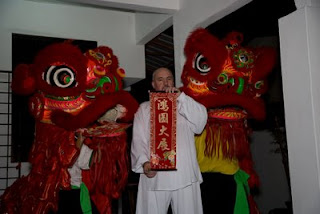 The Zhong Ding Association is a worldwide organisation that was established in 1987 by its Chief Instructor, Nigel Sutton at the request of his teacher Tan Ching Ngee of Singapore. The two main bases for the organisation are Europe and the Far East, but there are also instructors available in India and the USA.

The purpose of the association is to promote and research Tai Chi Chuan and other traditional martial arts. As such, the association runs classes and seminars throughout the year at a wide range of locations. These include special seminars conducted by visiting instructors who are renowned experts in their field.

Zhong Ding International is the mother organisation and is based in Malaysia where the association was born. This is led by Tan Mew Hong, who is also a committee member for the Penang Wushu Association and Vice Chairman of the Traditional Wushu Section. She teaches and promotes martial arts throughout Penang with a strong focus on this development within local Schools.

Malaysia is also the location for the Zhong Ding Training Academy which is the headquarters of the Zhong Ding International and the Zhong Ding organisation as a whole. The training academy offers short or long term residential training opportunities for Zhong Ding students to further their art.

As well as promoting through teaching, the association encourages its members to write for periodicals and related publications. Nigel himself has had articles published in a number of magazines and is the author of several books on Tai Chi Chuan.
Posted by Unknown at 05:14 No comments: